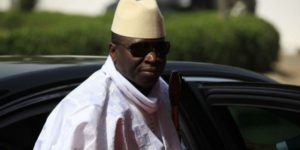 Amnesty International on Wednesday urged Gambian authorities to stop brutal crackdown on freedom of speech that has resulted in the arrest of dozens of people who demanded political changes in the West-African nation.

According to the Rights group, the country should face suspension from the Economic Community of West African States (Ecowas) unless it ends a “brutal repression.”

Opposition members have been calling for electoral reform and political change in Gambia. Authorities deemed the protests, started on 14 April, illegal as demonstrators failed to obtain permission from the police.

A least 50 people were arrested. Solo Sandeng, secretary of the opposition United Democratic Party (UDP) died alongside two others while in detention.

Solo Sandeng dedicated many years of his life to politics in Gambia and was previously arrested in 2013 for his political activities.

“Gambia has a long and brutal history of repression of critical voices, and demonstrators such as Solo Sandeng have paid a high price for peaceful protest,” Tine said.

On May 29, President Jammeh told Jeune Afrique magazine that “People die in custody or during interrogations, it’s really common. This time, there is only one dead and they want investigations? No one can tell me what to do in my country.”

In power since 1994, President Yahya Jammeh has been accused of undermining an effective opposition in the West African country.