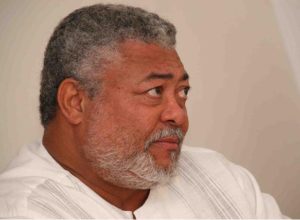 A former President of Ghana, Jerry John Rawlings, on Wednesday said he did not enjoy being in office, but had to stay on to help stabilize the west-African nation.

The former leader who marks his 69th birthday this June 22, disclosed that being a president was a very demanding job which he does not miss.

In his words, “some of us did not enjoy being in office, but we had to work hard and after 10 years of that kind of work during the revolution period you want to break along but you are forced to come back because you can see foolish promises are being made in the air so you stay on to help consolidate.”

Ghana has made progress with infrastructural developments but the majority of Ghanaians still find themselves in hardships.

Ghana, a cocoa, oil and gold producer, is one of West Africa’s most stable countries, with more than 20 years of political transitions through elections following a flurry of coups.

The country’s economy grew by 3.9 percent in 2015, the slowest in 15 years, on the backdrop of a slump in commodities prices and energy supply deficit.

However, the country’s fiscal managers are confident improvements in energy supply will boost economic activities.

Rawlings urged Ghanaians to ensure that the November 7 presidential and parliamentary elections are conducted in a peaceful atmosphere.

Rawlings seized power for a second time in 1981, toppling elected civilian President Hilla Limann, whom he criticized as inept. Eleven years later, Rawlings’s Provisional National Defense Council lifted a ban on party politics and he won a landslide victory in an election the opposition denounced as rigged.

Under the Constitution, he could not seek re-election in 2000 at the end of his second four-year term.