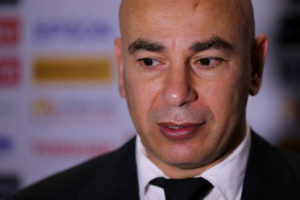 Hossam Hassan, a former Egyptian football and Al Masry manager has been found guilty on Tuesday of assaulting a photographer last week.

Following the final whistle in Al Masry’s 2-2 draw against Ghazl El-Mahalla, a fight broke out between the two teams as Hassan was caught on video chasing one of the photographers inside the pitch before punching him in the face.

The prosecutor ordered the detention of Hossam Hassan for four days pending investigations into his actions.

The charges brought against Hossam according to AFP were “aggression and blows to an official in the performance of his duties.”

The Egyptian Football Association handed the legendary striker and the former Al Ahly and Zamalek midfielder a three-game ban and an EGP 10,000 fine for his unsporting behavior after the game.

His club was also fined 20,000 Egyptian pounds (about 2,000 euros) for the incident, as decided by the Egyptian Football Federation on Saturday.

Hassan, Egypt’s record scorer with 72 goals in 176 international matches, was banned several times for disciplinary reasons and was fired as Masry coach in 2008 after he and his twin brother Ibrahim Hassan, the club’s football director, were involved in ugly scenes following a regional clash away to Algeria’s JSM Bejaia.