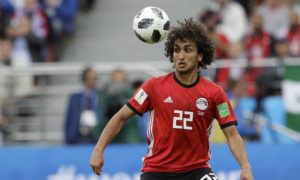 Egypt have booted out midfielder Amr Ward embroiled in an alleged sexual scandal as the national squad qualify for the second round of the AFCON tournament.

The Egyptian Football Association (EFA) in a statement said the 25-year-old player has been dismissed over indiscipline.

“The head of the Egyptian Football Federation, Hani Abu Reda, has decided to dismiss Amr Warda from the team’s camp after consulting with the team’s technical and administrative staff, in order to maintain the state of discipline, commitment and concentration,” the EFA said in a statement.

The Egyptian team had been embroiled in a sexual harassment scandal following the release by Merhan Keller, a British-Egyptian model, of screenshots showing a series of inappropriate messages she claimed Warda had sent her via Whatsapp and Instagram, The Guardian reports.

The Egyptian player was on substitute during the opening match against Zimbabwe that ended by 1-0 victory for Egypt.

Egypt booked their place in the second round of the competition Wednesday after defeating DR Congo.

Warda this season played for Greek club Atromitos on a loan from Super League side PAOK.

Posted by Emmanuel Agbenonwossi on June 27, 2019. Filed under News, Zoom. You can follow any responses to this entry through the RSS 2.0. Both comments and pings are currently closed.