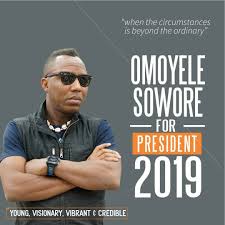 Nigerian security agents have arrested former presidential candidate who was calling for revolution in Africa’s most populous nation.

Omoyele Sowore, the flag-bearer of the African Action Congress in the February 2019 presidential election, has been arrested by the operatives of the Department of State Services, local media reported.

According to local media, DSS operatives arrested Sowore in the early hours of Saturday in his apartment.

The media say Sowore’s “arrest and detention are not unconnected to #RevolutionNow, a series of planned protests against bad governance in Nigeria scheduled for August 5, 2019”.

Sowore in a series of twits said Nigeria needs revolution partly because the last elections were not credible, along with a list of other issues ranging from corruption to ineptitude.

The State Security Service said the calls for revolution were unlawful.

“He has crossed the line; he has threatened public safety… Nothing will happen, there won’t be any revolution. The government, which has been elected democratically, will be in place,” the secret police’s spokesperson said.

The presidency on Sunday said there is “a difference between peaceful call to protest and incitement for a revolution.”

Posted by Emmanuel Agbenonwossi on August 5, 2019. Filed under News, Zoom. You can follow any responses to this entry through the RSS 2.0. Both comments and pings are currently closed.