South Africa: Nigerians fly back to Lagos after xenophobic attacks 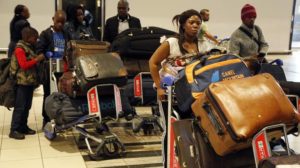 Almost 200 Nigerians have left South Africa and returned to Lagos amid xenophobic violence in the southern African nation.

The repatriation came after a cycle of violence burst out in Johannesburg leading to attacks on hundreds of foreigners-owned businesses.

The nationalities of those killed have not been confirmed yet, but Nigerians, Ethiopians, Congolese, and Zimbabweans were assaulted, according to local media.

The flights were offered to Nigerians living in South Africa free of charge.

The attacks on foreign nationals and their businesses were not the first of their kind in South Africa.

A majority of the Nigerian population alongside other African migrants in South Africa fled poverty and lack of possibilities in their own countries.

President Cyril Ramaphosa had condemned the violence and stressed that measures were being taken to ensure that the violence does not mutate.

Posted by Emmanuel Agbenonwossi on September 12, 2019. Filed under Columns, News, Zoom. You can follow any responses to this entry through the RSS 2.0. Both comments and pings are currently closed.