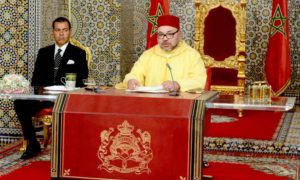 King Mohammed VI paid tribute to African States which voiced support to Morocco’s decision to reintegrate the African Union and recover its natural place, as this return will enable the kingdom to continue defending its interests from within the pan-African organization and to enhance cooperation with its partners, at the bilateral and regional levels.

“Our country’s return to its natural place reflects our keenness to continue defending our interests from within the African Union and to enhance cooperation with our partners, at the bilateral and regional levels,” said King Mohammed VI in The Throne Day speech he delivered on Saturday, as Morocco was celebrating the 17th anniversary of the King’s enthronement.

For the Moroccan Sovereign, this return to the African fold will also “open up new prospects for Morocco, mainly in East and Equatorial Africa, and consolidate the country’s position as a player with regard to the continent’s security, stability, human development and solidarity.”

The monarch expressed special thanks to the 28 signatories of the motion addressed to the AU chairmanship, welcoming Morocco’s decision and pledging to work so that this legitimate return be effective as soon as possible.

“I would like to take this opportunity to thank all African sister nations for supporting Morocco in defending its territorial unity and for responding positively to its decision to return to its institutional family, particularly leaders of the 28 states, who have signed the statement, as well as those who have contributed to the initiative,” said the King who also expressed gratitude and esteem to Rwanda, which hosted the AU summit, and to its president, Paul Kagamé, for their support and collaboration.

The King made it clear however that Morocco’s decision to reintegrate the AU, in a bid to strengthen its African policy, does not mean that “Morocco will relinquish its legitimate rights, nor recognize a pseudo entity lacking the basic elements of sovereignty which was imposed on the African Union, in flagrant violation of the latter’s charter,” in reference to the so-called Sahrawi Republic, self-proclaimed by the Polisario.
Underlining Morocco’s commitment to its territorial integrity, King Mohammed VI said “If some are trying to make 2016 a “year of decision”, for Morocco it is a “year of determination” as far as our territorial integrity is concerned.

He recalled in this respect how Morocco has faced the fallacious statements and irresponsible behavior related to the management of the Moroccan Sahara issue and taken the necessary measures, dictated by the circumstances, to put an end to these serious deviations.

“We will continue defending our rights and will take the required measures to counter any future deviations. We will not give in to any kind of pressure, nor any blackmail attempts regarding the sacred cause of all Moroccans,” he insisted, adding however that “Morocco will remain open and ever ready to engage in constructive dialogue in order to find a final political settlement to this artificial dispute.”

“In this regard, I would like to call again for continued vigilance and mobilization to counter the maneuvers of Morocco’s opponents, who are infuriated by the development and progress witnessed in the Moroccan Sahara,” King Mohammed VI said, adding that “All conspiracies, overt or hidden, will not undermine our determination to go on with the implementation of our southern provinces development model.”

Referring again to Morocco’s return to the AU, the monarch said “It will also open up new prospects for Morocco, mainly in East and Equatorial Africa, and consolidate the country’s position as a player with regard to the continent’s security, stability, human development and solidarity.”
The king also renewed Morocco’s commitment to spare no effort “to boost strategic solidarity-based South-South partnership, particularly with African sister nations, both bilaterally and within West-African regional groupings,” recalling that as a major player in triangular cooperation, Morocco has placed development issues, particularly in Africa, at the top of its political agenda.