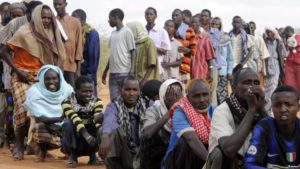 In a report released on Thursday, the right group said some of the 263,000 refugees in the camp say they have agreed to return home because they fear Kenya will force them out if they stay.

“The Kenyan authorities are not giving Somali refugees a real choice between staying and leaving, and the UN refugee agency isn’t giving people accurate information about security conditions in Somalia,” refugee rights director at Human Rights Watch, Bill Frelick, was quoted as saying.

HRW interviewed 100 refugees and asylum-seekers in Dadaab, some of whom said they agreed to return home because they fear the Kenyan government will deport them if they stay.

Recently, Kenyan government said it wants to close the camp over security concerns, saying attacks on its soil have been planned there. The government has set aside $10m for repatriation.

Dadaab camp was set up in 1991 to house families fleeing conflict in Somalia, and some people have been living there for more than 20 years.

In 2014, Kenyan authorities deported more than 300 people to Somalia in a crackdown the United Nations said violated the 1951 Refugee Convention, which prohibits the forcible return of refugees to areas where their lives would be threatened.