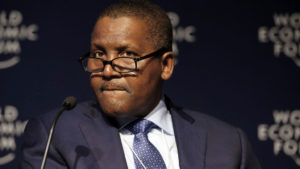 The Nigerian business mogul and Africa’s richest man, Alhaji Aliko Dangote, has been named co-chair of the US-Africa Business Center on Wednesday.

According to the US Chamber of Commerce, Dangote will serve alongside Jay Ireland, President and Chief Executive Officer of General Electric Africa, as Presidents of the center’s board of directors.

In a statement on the occasion of his nomination, Dangote said, “taking on this role with the US Chamber sends a clear message across Africa. American companies no longer see Africa as a stepping stone to global trade, but rather, as the future of trade.”

“Africa has emerged as one of the most promising growth regions in the world thanks to its vast array of industries, natural resources, and services” Dangote added.

A release from the chamber stated “we are honored to have Aliko Dangote on board to help guide the business communities’ efforts in pursuit of a new era of unprecedented growth between the United States and Africa.”

“The future of job creation lies in the hearts and minds of business leaders and their enterprises across Africa. We are fortunate to have an opportunity to tap into the expertise of Dangote and our board to ensure that US companies have strong partners across Africa and can provide access to African companies interested in the US market,” the statement added.