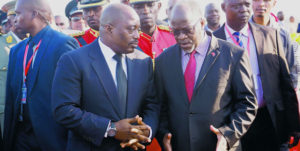 The Democratic Republic of Congo (DRC) and Tanzania on Tuesday inked a memorandum of understanding in the capital Dar es Salaam, to jointly explore the petroleum potential of Lake Tanganyika.

Joseph Kabila who received a 21 gun salute when he arrived for a three-day official visit in Tanzania told a press conference “we have already discovered oil in the western parts of Lake Albert, and there’s a great possibility that there’s also oil in Lake Tanganyika, therefore, joint exploration is the way to go for mutual benefits.”

He said he has discussed with his Tanzanian interlocutors cooperation in using a pipeline being constructed from Uganda to Tanzania to export Congo’s oil from Lake Albert in the future.

Lake Albert, like Lake Tanganyika is located on the border between Uganda and the DR Congo and is estimated to have a multi-billion barrel field.

The DRC shares a border with Tanzania to its west.

The new agreements come at a time when political tensions in DRC are high with a call for Kabila to step down and organize elections when his tenure ends in December this year.

Opposition protests have led to deaths and the arrest of many people as security officials clamped down on the anti-government protesters.