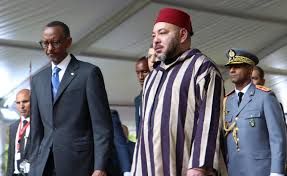 King Mohammed VI of Morocco wound up his state visit to Rwanda on Sunday and flew to Tanzania, the second leg in his eastern African tour, which adds a new milestone to the Kingdom’s Africa-oriented strategy by fostering political and economic ties with English speaking African countries.

These agreements, involving both the public and private sectors, set the legal framework to govern Moroccan-Rwandan relations and will contribute to boosting bilateral cooperation and facilitate experience and expertise sharing between the two countries.

One of the major agreements signed during the visit seeks to make Rwanda benefit from the ambitious Moroccan Green Plan, launched in April 2008. The plan, aimed at turning the Agricultural sector into an important lever for socio-economic development, actually contributed to increasing the income of thousands of small farmers and improving their living conditions.

The agricultural agreement also seeks to promote technical cooperation in the fields of irrigation infrastructure and animal health and to help Rwandan farmers benefit from the expertize of Morocco’s “groupe Crédit agricole”, the “Mutuelle Agricole Marocaine d’Assurances” (MAMDA) and OCP group regarding, respectively, the integration of small farmers in systems of funding, and of multi-risk insurance and the setting up of a database on soil fertility (fertility card).

The OCP group and the Rwandan Ministry of Agriculture also agreed to set up a fertilizer plant that will produce fertilizers adapted to Rwandan soil and crops.

Another outstanding MoU was signed by the Mohammed VI Foundation for Sustainable Development and the Imbuto Foundation, establishing deeper cooperation between the two institutions in the areas of health, education, youth capacity building and promotion of income generating activities.

The MoU falls in line with the Moroccan King’s resolve to give priority to the promotion of the human element in all his endeavors to bolster a South-South cooperation underpinned by solidarity values.

Under the accord, the Moroccan foundation will donate the Imbuto Foundation €1.0 million. The donation will finance two projects in the areas of health and education.

And as was the case with the visit to Rwanda, King Mohammed VI’s trip to Tanzania will highlight by the signing of several cooperation agreements in the fields of finance, agriculture, tourism, training and investments.

In this vein, Dar es-Salam hosted, on the eve of the sovereign’s visit to Tanzania, the first edition of the Moroccan-Tanzanian Forum on Trade and Investment.

She underlined that Tanzania’s economy is booming and that the country has made tremendous progress in easing business and attracting foreign investments, particularly in the sectors of agriculture, energy, oil and gas, infrastructure and mining.

Tanzania, with its political stability and prospering economy, offers tremendous opportunities to Moroccan investors, and its membership in the Eastern African Community will also open a market of 140 million inhabitants to Moroccan companies.