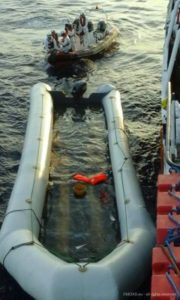 Over 200 migrants have been unaccounted for over the past two days after their boats, unfit for the Mediterranean crossing, left Libya shores.

According to Italian coast guards, UN High Commission for Refugees and NGOs the migrants were on two dinghies that capsized because of bad weather.

“Two rubber dinghies, which is what they are, rubber dinghies, packed with migrants, totaling over 300 we think in all … have succumbed to the waves off Libya in very bad weather,” said Leonard Doyle, International Organization for Migration’s (IOM) chief spokesman.

The survivors from one boat told rescuers they left Libya’s town of Sabratha at 3 am local time on Wednesday but their boat drifted few hours later. The survivors include 20 women and six children believed all from West Africa.

Another dinghy, which also sank, was reportedly carrying 130 passengers.

Migrants fleeing poverty, war and instability flood lawless Libya wherefrom they attempt the perilous journey with the help of smugglers.

“The Mediterranean is a deadly stretch of sea for refugees and migrants, yet they still see no other option but to risk their lives to cross it,” said Filippo Grandi, the U.N. High Commissioner for Refugees.

The dramas swell up the number of deaths to 4,220 so far this year compared with 3,777 recorded during the whole past year.