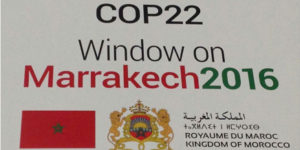 The 22nd Conference of the Parties to the Framework UN Convention on Climate Change, COP 22, kicked off in Morocco on Monday, in the presence of over 20,000 delegates from 196 countries.
During the opening ceremony, Morocco was officially handed over the presidency of COP22 by president of COP21 and French Environment Minister Segolène Royal.
In her opening address, Segolène Royal called for climate justice, especially for Africa and welcomed in this vein the speech that Morocco’s King Mohammed VI delivered Sunday from Dakar on the occasion of the 41th anniversary of the Green March, and in which he underscored that COP22 is a conference for Africa.
“Aware that Africa is one of the regions most affected by climate change, I have made sure that the Climate Conference which opens in Marrakech this week, is a conference for Africa,” the Monarch said in his Green March speech.

“Accordingly, I have called for an African summit to be held on the sidelines of this conference in order to develop a common vision to uphold our continent’s demands, particularly in terms of funding and transfer of technology,” he said.
Segolène Royal who underlined that Africa “suffers most from the impacts of climate change, especially desertification,” said climate justice consists in providing financing and technology transfer to the continent.
She recalled that the past year has been the hottest and was marked by several devastating climate phenomena, urging countries that have not yet ratified the Paris Agreement to do so before the end of the year.

The COP22 comes a year after the Paris climate conference, where 195 countries made a nonbinding agreement to keep warming below 2 degrees C above pre-industrial levels, with a stretch goal of limiting it to 1.5 degrees.

Each nation made a pledge to cut or curb its greenhouse gas emissions, and agreed to ratchet up its commitment in the future. The Paris signatories also agreed to raise more funds to help poorer countries adapt to a warming world.

Now, in Marrakesh, negotiators will try to figure out how to turn those promises into action.

The Marrakesh conference will also focus on the irony that Africa happens to be the first and hardest hit by the consequences of climate change even though it is the region that emits the lowest share of greenhouse gases emissions that cause the earth’s atmosphere to warm.
If the Paris Climate Conference led to a binding agreement, the COP22 will lay the foundation for a new global stage that would involve the signatories in a concerted action, said COP22 President Salaheddine Mezouar, underscoring that Morocco will engage in an open and transparent dialogue with the support of various partners to address climate change.

Debates in Marrakesh will cover African agricultural climate adaptation and promising strategies will be showcased, so as to ensure food security throughout the continent.

Studies conducted earlier this year predicted annual rainfall to decrease by 20 percent along the Mediterranean coast, while winter rains in southern Africa will also decrease, by perhaps as much as 40 percent. Less rain will have a serious impact on agriculture, mostly dependent upon rainfall.

According to information on the COP22 website, a framework will be developed in Marrakech from major policy recommendations to help with the implementation of the Moroccan Adaptation of African Agriculture Initiative, which applies to the whole African continent.

COP22 is the second of its kind to be hosted on Africa soil after Morocco hosted the 7th Climate Change Conference way back in 2001.