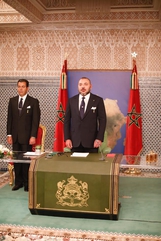 Morocco’s decision to retake its legitimate seat at the African Union is not a tactical move but a rational decision, said King Mohammed VI in his historic speech made Sunday in Dakar on the occasion of the 41st anniversary of the Green March

“Morocco’s return to the African Union is not a tactical decision, nor is it motivated by passing considerations. It is a rational decision, taken after careful thought”, added the Moroccan Sovereign.

“When we announced our return, we were not asking for anyone’s permission to exercise our legitimate right”, he stressed, noting that “Morocco is returning to its natural place and is supported by an overwhelming majority to reclaim its seat within the African institutional family”.

He also said that “Morocco, which does not meddle in other states’ home affairs and rejects divisive policies, hopes all parties will respond to this decision in a wise and responsible manner, to make sure African unity and African peoples’ interests prevail.”

According to the Moroccan monarch, Rabat’s decision to rejoin the African Union is “the culmination of our African policy and the outcome of Morocco’s solidarity-based field action in a number of African countries, in terms of economic and human development aimed at serving African citizens”.

In addition to cooperation at the bilateral level and with regional groupings, “this return will enable our country to adhere to sectoral development strategies in Africa and actively support and enrich them thanks to the outstanding experience Morocco has gained in various fields”, stressed the Sovereign.

As far as the continent’s major issues and problems are concerned, “the return of my country to its institutional family will enable Morocco to help make the voice of Africa heard in international forums. It will also enable it to further strengthen its commitment to finding objective solutions to these issues, bearing in mind African peoples’ interests and particularities”, went on King Mohammed VI.

He expressed in this regard his readiness “to further contribute to consolidating security and stability in the various war zones and hotspots and to finding peaceful solutions to conflicts.”

Furthermore, “this return will enable Morocco to become more involved in the continent’s efforts to fight extremism and terrorism, which compromise the future of Africa”, stressed the Moroccan Sovereign.

On the royal choice to deliver this year’s Green March speech from Dakar, King Mohammed VI said Senegal was one of the countries that took part in “this national epic, together with other African and Arab nations”.

“This beloved country has always been at the forefront of advocates of the Kingdom’s territorial unity and lofty interests. Furthermore, on several occasions, it has shown, through words and deeds, that it considers the cause of the Moroccan Sahara as one of its own national causes”, explained the Monarch.

”I have also chosen Senegal because of the special status it enjoys in Africa, thanks to its historically democratic model, its political and social stability, as well as its economic dynamism”, underlined the Moroccan Sovereign.

He also cited fraternal bonds, based on solidarity and a shared destiny, which have historically existed between the Moroccan and the Senegalese peoples, who stand as one single people, with each one forming a natural extension of the other, in a unique symbiosis between two independent countries respecting each other’s particularities.