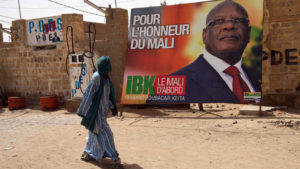 Mali held long-delayed local elections Sunday to fill posts left vacant in the north since Islamist militants hijacked a 2012 Tuareg rebellion and ousted the government.
Voters in the West-African nation were electing 12,000 councillors across the country, as the government grapples with implement a floundering peace deal and warding off a jihadist threat in the north.
Reuters reported that voting was cancelled in districts around Timbuktu after ballot boxes were burned by unidentified armed men, residents and officials said.
Kidal which is the stronghold of former rebels of the Coordination of Movement of Azawad (CMA), also witnessed voter boycott.
The vote was also cancelled in numerous villages in the neighbouring Gao region.
Opposition candidate Saibou Barry was kidnapped Saturday morning in the central town of Koro with his party saying his vehicle was found burned and he had been driven to “an unknown destination.”
“These elections have been delayed four times. That’s enough,” said President Ibrahim Boubacar as he cast his vote.
U.N. Secretary-General Ban ki-moon has called for a peaceful vote “where political and security conditions allow.”
Ban also called on Malian government to “pursue a constructive dialogue with all stakeholders to defuse tensions that may arise before and after the poll”