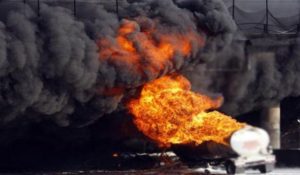 A fuel truck explosion in Mozambique killed 73 people on Thursday, the government said, indicating that scores of other people were injured.
“The incident occurred when citizens tried to take gas from a tanker” in Caphiridzange, in the western Tete province, a few dozen km from the border with the Malawi, a statement from the council of ministers said.
“With the heat, the truck caught fire, killing, according to the first results of the investigation, 43 people and burning 110 others, including adults and children,” the text said.
“Ambulances and medical personnel were sent to assist the victims and the wounded were evacuated to Tete Hospital,” the government said.
The government also indicated that it “deplores the loss of life… and is currently providing the necessary assistance in order to save lives and to comfort the victims’ families”.
Three ministers are due to arrive in the area on Friday to oversee the rescue work and carry out an inquiry.
International Monetary Fund ranks Mozambique as one of the world’s poorest nations.
Since the country civil war ended in 1992 its population has suffered the consequences of an economic crisis.
The government recently increased the price of fuel, after the value of the local currency sunk against the US dollar.