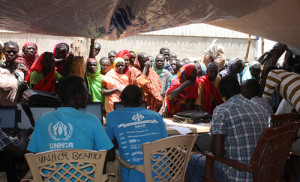 The UN High Commissioner for Refugees, António Guterres, has sounded the alarm as the humanitarian situation in Upper Nile state, South Sudan, is worsening with the arrival of increasing numbers of refugees from the Blue Nile State in Sudan.
Guterres said Monday the numbers of refugees are constantly increasing and the conditions of many of these refugees are “shockingly bad”.
According to a HCR press release, over the past three weeks an estimated 35,000 refugees have arrived in Upper Nile, which is already hosting a refugee population of approximately 70,000, fleeing the raging fighting between the Sudanese Armed Forces and the Sudan People’s Liberation Army-North in Blue Nile.
“This is a dramatic change in an already difficult humanitarian situation,” said Guterres.
Including the new arrivals in Upper Nile, South Sudan is currently hosting some 150,000 refugees from Sudan, representing a huge logistics challenge for humanitarian aid to be properly delivered.
UNHCR is also racing to move the refugees away from the volatile border to safer locations before seasonal rains render roads muddy and impassable.
In addition to the security situation in the border region, there is also the problem of safe drinking water shortages which makes it all the more urgent that people are relocated fast to better protected places, Guterres said.
The international medical humanitarian organization Doctors without Borders also warned that the tens of thousands of refugees seeking safety in South Sudan are in a critical situation. They are in desperate need of humanitarian assistance and are suffering from a dire lack of water.
The refugees are living in camps with alarmingly insufficient basic services, especially water supplies, the organization said urging the UNHCR to immediately identify a suitable place of refuge.