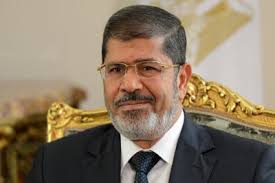 An official under the condition of anonymity said that Osama was wanted by authorities without revealing any details but Al-Ahram reported that the arrest is linked to his role in inciting violence in 2013 following the eviction and arrest of his father . Osama, a lawyer and the family’s spokesman, is reportedly the second of Morsi’s sons to be arrested since 2013.

A police search in Osama’s house ended with the confiscation of a sum of money and a personal computer.

Osama is expected to appear in court tomorrow, Saturday, during the next session of the mass trial, for his role in the 2013 Rabaa sit-in which was violently dispersed by Security forces causing the death of more than 800 protesters and around 10 security officers. It was the bloodiest day in a relentless crackdown on Morsi’s Muslim Brotherhood movement after the military-backed coup d’état against his government in July.

Egyptian courts have sentenced hundreds of Islamists to death. Morsi faces a raft of charges in at least four separate cases and has received death sentences from lower courts. Appeals courts have overturned many of the convictions. In November, an Egyptian appeals court quashed one of two life sentences against the former president, following the overturning of a death sentence by the same court earlier that month.