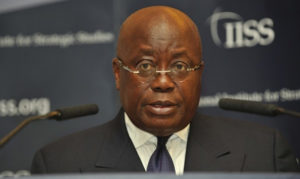 Akufo-Addo on Monday said that his government will set up a special prosecutor’s office to fight corruption in the West African nation.

Speaking to the BBC, Akufo-Addo said he did not want to give an impression that he was carrying out a “witch-hunt” against his rivals.

“As a matter of principle, we have decided to take the politics out of it, so that screams of witch-hunting … don’t arise, by establishing an office of special prosecutor,” Akufo-Addo said.

He said the prosecutor would be “somebody who will be independent of the executive and whose remit will be to investigate and tackle issues of corruption”.

The President-elect further vowed to tackle challenges confronting Ghana in relation to unemployment, high cost of living, and health care among others.

“My goal is to provide effective leadership, which is honest, competent and determined to deliver, and address these challenges, so that we can put our nation onto the path of progress and prosperity, and, thereby, improve rapidly the standards of living of Ghanaians,” he added.

Akufo-Addo’s assurance comes on the back of fears expressed by former Minister of Transport, Dzifa Ativor who had prior to the December 7 polls called on Ghanaians in the Volta Region not to vote for the NPP since most NDC members would be jailed if Akufo-Addo becomes President of Ghana.

Akufo-Addo won the presidential election with 53% of votes cast.

The erudite 72-year-old rights lawyer’s victory tapped into an electorate fed up with economic fiascos and corruption scandals, on a platform promising to boost growth and deliver jobs.