The European Union signed an agreement with the 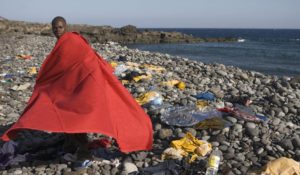 aimed at enabling the return of migrants whose asylum requests have been rejected.

A statement from the Dutch foreign ministry, which signed the agreement on the EU’s behalf, noted that “it is the first time the EU establishes such a precise mechanism with an African country with regards to returning failed asylum seekers.”

The accord seeks to fight “the root causes of illegal migration” and to “enable the return from Europe of Malian migrants”, the statement said.

Under the deal, “Malian civil servants will travel to EU member states to help determine the identity of migrants, in order to accelerate their return”, the statement said.

“Young Malians have so much to give to their country. We must help stop Malians travelling to North Africa or Europe from losing their lives or falling into the hands of smugglers,” Dutch Foreign Minister Bert Koenders, whose country will hold the EU’s rotating presidency from January 2017, said.

The International Organization for Migration said Mali is in the top 10 countries of origin for migrants arriving in Europe this year, and is home to extensive smuggling routes which are used by people traffickers.

Despite a peace deal being signed last year, the Malian army is mostly absent in the desert north – a key route smugglers use to traffic migrants.