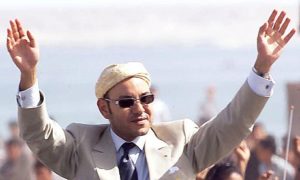 King Mohammed VI of Morocco has been awarded the 2016 Mandela Peace Prize for his efforts to promote peace and justice around the world and for his Africa-oriented policy that seeks to boost the continent’s development.

The king won the prize for his “contribution to building a society of justice and peace between humans and nations, in addition to his efforts to promote the development of Africa through economic, security and cultural diplomacy,” said Paul Kananura, Chairman of the Mandela Peace Prize, which is awarded to people or institutions that foster peace within Africa.

For the Mandela Peace Institute, King Mohammed VI reflected this year the philosophy and the spirit of the South African iconic leader, Nelson Mandela.

The Prize has gone to the Moroccan monarch for his efforts to bridge the wide gap between the haves and have-nots through the construction of a fair society as promoted by Mandela during his life.

Since he came to power in 1999, King Mohammed VI made several trips across the continent. The latest that took place just this fall took him to Rwanda, Tanzania, Ethiopia, Madagascar, and Nigeria. Each of the monarch’s African visits is marked by the signing of multiple bilateral agreements and the launch of groundbreaking economic projects.

The institute awards other Prizes in other areas.

This year, the Mandela Prize for Democracy Award went to Mali President Ibrahim Boubcar Keita for “his immense efforts and contribution to democracy and security consolidation in northern Mali.”

The Mandela Security Award went to Niger President Isoufou Mahmadou following his “firm national security policy and his regional leadership in the security field and struggle against terrorists and drug trafficking in the Sahel and the Lake Chad.”
Senegalese President Macky Sall was also honored with the Mandela Prize of Emergence for his “visionary societal projects to develop the future of his country,” while the good governance prize went to Benin’s President Patrice Talon.