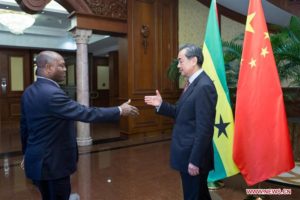 The foreign ministers of China and Sao Tome and Principe signed a statement on Monday to resume diplomatic relations between the two nations after they severed these ties 20 years ago.

“We agreed that the one China principle should be the foundation of bilateral relations at any time, and should be upheld all the time without wavering. We both agreed on mutual understanding and support in regards of each other’s core interests and major concerns as well as firmly safeguarding the common interests of the developing countries,” the Chinese Foreign Minister said.

The Foreign minister of Sao Tome and Principe, Urbino Botelho, said the resumption of diplomatic ties is of historic significance for bilateral relations.

“Above all, we should admit the increasingly important role played by the People’s Republic of China in the world, as a champion for development and restless defender of the rights for people to decide their own path and destiny” he said.

“We want to redeem our mistakes in the past.” He said he hoped that more Chinese businesses would invest in his country and more Chinese tourists would visit.

Most of the world does not formally recognize Taiwan as a condition of maintaining relations with China. Sao Tome and Taiwan broke ties last week, leaving only 21 countries and governments, mostly in Latin America and the Caribbean, that have official ties with Taiwan.