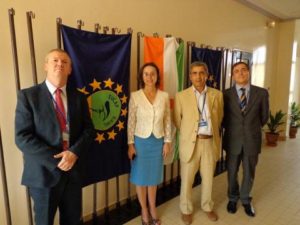 The Council of the European Union last week extended the mandate of the EU’s foreign mission EUCAP Sahel Mali for two years, until 14 January 2019. The Council also allocated a budget of €29.7 million to the mission for the period running from 15 January 2017 to 14 January 2018, the Council announced in a press release.

The EUCAP Sahel Mali civilian mission assists and advises Mali’s internal security forces as they implement the reform in the security sector laid down by the government.

It provides training and strategic advice to the Malian police, gendarmerie and national guard, and to relevant ministries, in order to support the security sector reform, the press release said.

The mission is part of the EU’s comprehensive approach to security and development in the Sahel, which aims to support the Malian state in ensuring constitutional and democratic order, establishing the conditions for lasting peace and maintaining authority throughout the entire territory.

There are two other CSDP missions underway in the region: EUTM Mali, which contributes to the restructuring and reorganization of the Malian Armed Forces through training and advice, and EUCAP Sahel Niger, which supports the fight against organized crime and terrorism in Niger.