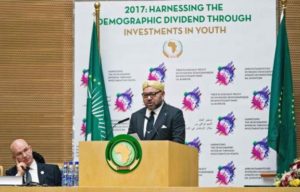 Following the diplomatic victory scored by Morocco in Ethiopia against its enemies in Africa after its readmission by the African Union (AU) with the approval of the majority of the member states, King Mohammed VI took the floor Tuesday before the AU 28th Summit to thank African leaders for their massive support and to survey his country’s Africa-oriented strategy.

“It is so good to be back home, after having been away for too long! It is a good day when you can show your affection for your beloved home! Africa is my continent, and my home”, said the Sovereign in his speech.

“I am home at last and happily reunited with you. I have missed you all”, went on to say the Monarch, affirming that the strong support Morocco has received is “proof of the solid bonds that unite us”.

“It is time to return home; at a time when the Kingdom is among the most developed African nations and when a majority of Member States looks forward to our return, we have decided to join our family again. A family we had not really left!”

“During this period I, personally, was keen to give fresh impetus to this action, by making more visits to various African sub-regions”, said the Monarch, noting that he paid 46 visits to 25 African countries wherein numerous solidarity-based and win-win partnership agreements were sealed.

The Moroccan sovereign recalled the landmark strategic projects he initiated during these trips, such as the Africa Atlantic Gas Pipeline project he launched in Nigeria with President Muhammadu Buhari.

This project, which will allow natural gas to be transported from gas-producing countries to Europe, will benefit the whole of West Africa, said King Mohammed VI.

He also recalled fertilizer production plants that have been set up with both Ethiopia and Nigeria, saying these projects would benefit the continent as a whole and as they would improve African agricultural productivity, food security and rural development, one of the major challenges facing Africa.

“As we know, basic food needs cannot be met with gas or oil,” he said explaining that meeting the food security challenge facing Africa is the objective of the initiative for the Adaptation of African Agriculture, or Triple A Initiative, which he promoted during the COP22.

“It is an innovative and extremely concrete response to the common challenges posed by climate change. As soon as it was launched, the initiative was backed by some thirty African countries,” King Mohammed VI said, adding that “the “Triple A Initiative” is aimed at providing more significant funding for the Adaptation of small-scale African Agriculture.”

“The initiative was also one of the main axes of the Africa Action Summit, which I had the privilege of chairing last November in Marrakesh,” he pointed out.

Morocco is offering to build a safe, solidarity-based future with African Brethren, said King Mohammed VI, stressing that the North African Kingdom is not returning to the African Union through the back door, but by the main gate.