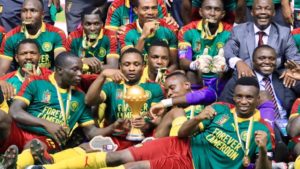 Indomitable Lions of Cameroon have won the final of the Africa Cup of Nations after beating the pharaohs of Egypt 2-1 on Sunday in Libreville. The Central African nation returned to the continental summit, after a 15-year wait.

Sunday’s match heated up with a goal in the 22nd minute for Egypt by M. Elneny and later levelled by Cameroon from a beautiful goal from Nkoulou in the 60th minute.

The winner was decided in the 89th minute when Aboubakar controlled a long ball forward with his chest at the edge of the box, flicked it over the stranded Gabr, before gathering, taking a step and smashing home off his right foot to make Cameroon the winner of the tournament.

The Pharaohs last tasted defeat in Africa’s most prestigious competition back in 2004, a run spanning 13 years and 24 matches.

As for Cameroon, this new trophy makes them the second most successful nation in the AFCON’s history – behind Egypt – and marks the first time they have beaten the Pharaohs in the final in three attempts.

No less than eight of Cameroon star players, plying their trade in European leagues, refused Belgian coach Huge Broos’ call up to the squad ahead of the AFCON. They lost an opportunity to raise the AFCON cup.