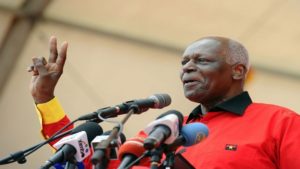 Angolan rebels on Tuesday called on the country’s oil region to boycott the elections scheduled for August.

The separatist rebels of the Front for the Liberation of the Enclave of Cabinda (FLEC) said it would not participate in a “foreign” election.

“The FLEC does not accept the permanence of a foreign power on our territory, but does not want to interfere in the internal affairs of Angola,” the group said in a statement.

“For this reason, FLEC urges all the people of Cabinda to not participate in presidential elections in Angola,” it said.

Angolan President Jose Eduardo dos Santos last week announced that he would step down this year to bring an end to a 37-year reign marked by an unrelenting authoritarian style.

Joao Lourenco, Dos Santos’s defense minister, was named as the ruling party’s candidate to run in the president’s place in August elections.

Dos Santos has been credited for leading Angola out of the war, moving away from hardline Marxism and fostering a post-war oil boom and foreign investment surge that transformed central Luanda.

However, the FLEC, which fought a low-level insurgency for four decades, has been seriously threatened by Santo’s regime because the crude is drilled on their territory.