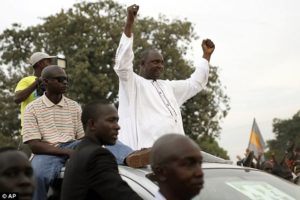 Gambia is going to rejoin the Commonwealth, British Foreign Secretary Boris Johnson announced on Tuesday as he visited the West African nation.

In 2013, Former autocrat Yayah Jammeh who has ruled for 22 years withdrew Gambia from the Commonwealth, the 54-member grouping including Britain and most of its former colonies, branding it a “neo-colonial institution”.

However, the newly elected president Adama Barrow said he would reverse all of these moves.

“We want to expedite everything. Gambia lost a lot, so we wanted to make sure we join all international organizations. Gambia will be back again,” Barrow said recently.

The British Foreign Secretary heralded the return as he set off for a two-day visit to Gambia and Ghana.

“I am very pleased that Gambia wants to rejoin the Commonwealth and we will ensure this happens in the coming months,” Johnson said.

“The strength of our partnerships shows that Global Britain is growing in influence and activity around the world.”

Johnson’s trip to Gambia is the first ever by a British Foreign Secretary, according to government records.