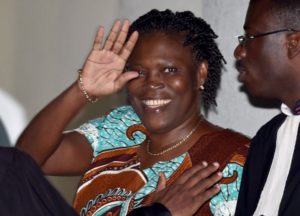 Ivory Coast’s former first lady Simone Gbagbo has been acquitted by the Abidjan Assize Court   on Tuesday for her role in 2010 and 2011 post-election violence.
“The majority jury declares Simone Gbagbo not guilty of the crimes charged, pronounces her acquittal and orders her to be released immediately if she is not detained for other causes,” said Judge Kouadjo Boiqui, President of the Assize Court.
The iron lady is already serving a 20 years prison sentence since 2015 for “attacking the safety of the State”.  She and her husband, Laurent Gbagbo, disputed the 2010 presidential election won by Gbagbo’s challenger, Alassane Ouattara.
The Attorney General of the Abidjan court, Aly Yeo, had imposed a life sentence on Simone Gbagbo, seeing it as an act to seal “national reconciliation” after the bloody post-election crisis.
“Reconciliation is above all a matter of justice (…) without justice reconciliation is only an illusion,” Aly Yeo said.
The Ivory Coast government refused an order from the ICC in 2015 to hand over Simone Gbagbo, saying it would bring to justice to her victims in a domestic court.
Supporters of the Gbagbos said the former first lady’s trial was politically motivated.
As a reminder, Gbagbo’s refusal to accept the 2010 election outcome was followed by violence and eventually a resumption of armed conflict.
Between December 2010 and May 2011, at least 3,000 civilians were killed and more than 150 women were raped, with serious human rights violations committed by both sides.