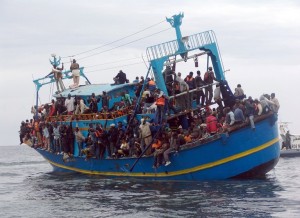 A total of 26,589 African migrants and refugees have reached Europe by sea during the first three months of 2017, with over 80 percent arriving in Italy and the rest in Spain and Greece, according to the International Organization for Migration.

During the same period, 649 migrants lost their lives against 566 deaths recorded during the first quarter of 2016, a year that witnessed the arrival of some 163,895 migrants in Europe.

IOM spokesman Flavio Di Giacomo said that 2,320 migrants were brought to land on March 23 and 24. The majority of those rescued included Nigerians, Gambians, Ivoirians, Ghanaians, Malians, Senegalese and Guineans (both from Guinea-Bissau and Guinea-Conakry).

He added that, on Saturday and Sunday (March 25 and 26), another 1,160 migrants had been rescued at sea and are being brought to land.  One corpse was found on a dinghy, which was carrying 138 migrants.

According to the IOM spokesman, NGO Proactiva OpenArms retrieved last week the remains of five migrants from a capsized dinghy – plus a sixth victim which the NGO said has since been retrieved near the original site of the shipwreck.

These bodies were brought to Catania. IOM believes the dinghy found by OpenArms is the same one that was rescued by Libyan fishermen who saved 54 people on March 21.

According to the 54 survivors brought to Libya, approximately 120 migrants were onboard. Including the six known dead, IOM reports that 66 victims remain unaccounted for in that tragedy.

Worldwide, the IOM Missing Migrants Project reports that fatalities through March 27 number 1,149, with the Mediterranean region accounting for the largest proportion of deaths – over half of the global total.