Mali’s national peace conference closed proceedings this weekend with a call for negotiations with Jihadists in the country’s north in a bid to end successive separatist uprisings in in the West African nation. 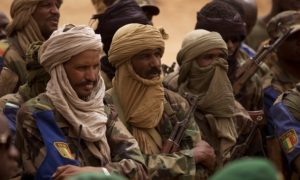 The Coordination of Movements of Azawad (CMA), the former rebel alliance, and Mali’s opposition groupings had previously boycotted the conference, citing lack of consultation and time for preparation.
They however reversed their decision and attended the closing ceremony on Sunday April 2.
The conference urged talks with Amadou Koufa, leader of the Macina Liberation Front, a Fulani Jihadist group, and Iyad Ag Ghali, leader of the Islamist Ansar Dine group.
The conference said authorities should “Negotiate with the belligerents of central Mali, in this case Amadou Koufa, while preserving the secular nature of the state …. Negotiate with the religious extremists of the north, in this case Iyad Ag Ghali.”
Mali descended into chaos in 2012 following the seizure of the northern part of the country by separatist Tuareg rebel groups and Al-Qaeda linked-transnational militant groups.
Tuareg separatist groups worsened the security situation by declaring a separate State, which held until the French intervention early in 2013.
Although the Jihadists were routed, large swathes of Mali remain outside the control of domestic and foreign troops.