Former Ghanaian player, James Kwesi Appiah, has been appointed the new coach of the Black Stars by a six-man coach search committee, the Ghana Football Association (GFA) announced on Tuesday. 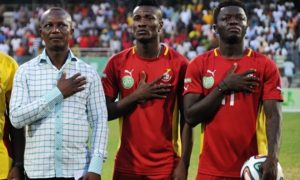 “Appiah will be handed a two-year contract and will start his duties on May 1, 2017. He will also take full charge of the Local Black Stars,” the GFA said in a statement.

Kwesi Appiah left the black-stars in September 2014 after the Brazil World cup.

He made history as the first Ghanaian to qualify the Black Stars to a FIFA World Cup after leading the team to the 2014 edition of the competition in Brazil.

His new task is to overcome Ethiopia, Sierra Leone and Kenya in the qualifiers of the 2019 Africa Cup of Nations, which start in June 2017. He is also tasked to end Ghana’s trophy drought at the 2019 AFCON.

As a reminder, the former Chelsea coach, Avram Grant, ended his stay with Ghana’s Black-Stars after the 2017 Africa Cup of Nations.