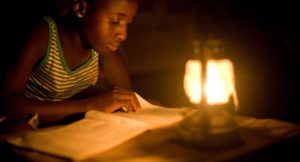 Ghana witnessed a nationwide blackout on Wednesday night, leaving millions of Ghanaians and businesses in the West-African nation without electricity.
According to the head of GRIDCO, the national grid, “there was a surge of power around 9:40pm last night; we lost many generators across the country. As a consequence, we lost supply to most parts of the country…, currently we are in the process of restoring it”.
Earlier this year, another nationwide blackout was blamed on a “system failure”.
Systems collapse usually occurs when a generator is lost suddenly or a new generator is being added to the main power stream. Sometimes the power cut occurs when load increases or reduces suddenly for various reasons.
Ghana is praised as one of the most stable African democracies; but the state of its economy has not been as impressive amid a deepening energy crisis.
Government is set to conduct an audit of all Power Purchase Agreements (PPA) signed between the Electricity Company of Ghana (ECG) and Independent Power Producers (IPPs) under the former National Democratic Congress government, President Nana Akufo-Addo has hinted.