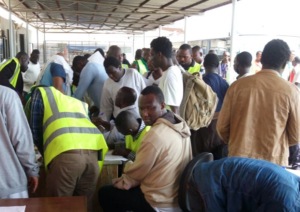 The all-male deportees arrived in handcuffs before they were handed over to local authorities.

U.S. President Donald Trump has vowed to deport illegal immigrants and immigrants with criminal records as part of his immigration laws to be rolled out.

According to him, the Trump administration would not paint every African country with the same brush. “Ghana’s economy is growing, Nigeria’s is shrinking. We have a very different relationship with Ghana. Ghana is more supportive of free trade and shares a long history of peaceful existence which Nigeria does not have, so I think we need to be cautious,” Robert Jackson added.