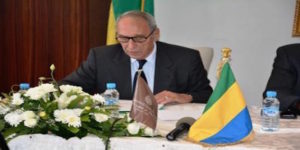 Edouard-Pierre Valentin, father of Sylvia Bongo, the wife of President Ali Bongo, was attacked by some Gabonese activists in the French capital Paris, local media reported.
According to a video circulating on social media, dozen men were showed shouting and banging on a table on which Ali Bongo’s father-in-law and a former minister sat at a Paris café.
The activists accused Edouard-Pierre Valentin of overseeing a fraudulent reelection of his son in law that led to a political crisis in the central African oil-rich nation last year. It took the intervention of Paris police to bring the almost violent situation under control.
Local media reported that Ali Bongo summoned the ambassador to France with strict instructions that his father-in-law be given more robust security.
Bongo’s re-election last August by just a few thousand votes led his main challenger Jean Ping to accuse the administration of electoral fraud.
Violence broke out days after the election, and opposition says more than 50 people were killed in clashes.
Gabon’s constitutional court rejected the allegations vote-rigging, but international observers have also criticised the poll and the European Parliament in February called the results “extremely doubtful” though stopped short of imposing sanctions.
The International Criminal Court team was in the central African nation to investigate claims of post-election violence by Ping and 15 non-governmental organizations.
http://info241.com/l-ambassade-du-gabon-en-france-vole-au-secours-du-beau-pere-d,2905
http://www.africanews.com/2017/06/29/ali-bongo-s-father-in-law-attacked-at-paris-cafe-by-gabonese-men/