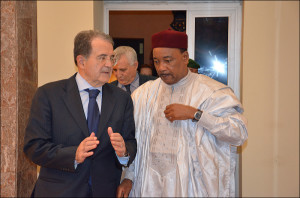 Niger’s capital city, Niamey, is hosting this February 15-16 an international conference that will ponder on development and security issues in the Sahel, discuss the evolving situation in the region, and assess regional and international responses to this situation.
According to the Nouakchott-based Center4S, the conference will focus on the ongoing armed conflict in Mali and its impact on the whole region and will make recommendations to help the region countries overcome development and cooperation hindrances and adopt new strategies to take up the challenge of terrorism and religious extremism.
“Democracy and freedom are the best ingredients in preventing armed violence,” said President of Niger, Issoufou Mahamadou, on the eve of the conference to be attended by high-level representatives from the African Union, United Nations, European Union and regional governments, in addition to scores of civilian and military experts in peace and security and civil society delegates.
President of the Centre4S, Ahmedou Ould Abdallah, who will be attending the gathering, said participating experts will have the opportunity to hold side sessions to debate a wide range of additional issues, including ways of strengthening stability in Sahel countries and encouraging political dialogue in Mali as a way to support military intervention.
The conference, taking place one month after the French led international military intervention in Mali, will also be attended by Romano Prodi, the Special Envoy of the UN Secretary-General for the Sahel, and Said Djinnit, UN Secretary General’s Special Representative for West Africa.
Other experts and specialists include Professor Andre Bourgeot CNRS, Paris, Wolfram Larcher (SWP, Berlin), Abdelmalek Alaoui, President of Global Intelligence Partners (GIP), John Temin from the U.S. Institute of Peace (USIP), Landing Savane from Panafrican Institute of Strategy (IPS-Senegal), Ambassador J.D. Bieler, Switzerland’s Special Envoy to the Sahel and many others.
Romano Prodi, and Said Djinnit have already started a three-day joint visit to the region for meetings with the Heads of States of Senegal, Mauritania, Burkina Faso, and Niger, as well as with representatives of the civil society, in order to grapple with the current challenges facing the Sahel region, including the situation in Mali.
The two UN officials were this Thursday in Nouakchott and conferred with Mauritania’s President Mohamed Ould Abdel Aziz, who voiced his country’s resolve to work with the UN and the Sahel States to establish peace and prosperity in the region.
Mauritania has also agreed to coordinate with Senegal policies in matters of security and struggle against terrorism and trans-borders crime.
The two countries, both Mali’s neighbors, reached the agreement during a meeting of their joint cooperation commission which convened in Nouakchott at the beginning of this week.