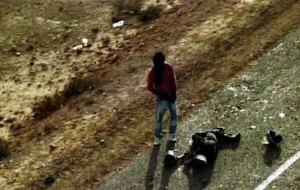 The two week long trial of the 24 members of what is called the Gdim Izik Group wound up early Sunday with the pronouncement of prison sentences against the defendants indicted for the killing of eleven security enforcement agents in 2010 in the Western Sahara.
The sentences pronounced by the Rabat Military court range from two years in Prison to life imprisonment terms.
Nine defendants, including one in absentia, were thus sentenced to life imprisonment, four to a 30 year prison term, eight to 25 and two to 20 years in prison. Two defendants, sentenced to 2 years in prison, a term they already spent behind the bars during custody, were immediately released.
The defense lawyers will probably appeal to the Cassation Court.
The Gdim Izik events date back to 2010 when some inhabitants of the Western Sahara city of Laayoune set up a tent camp to claim economic and social rights and express grievances against unemployment, mainly youth unemployment. During the camp dismantling, ten security enforcement agents and a fireman from the civil protection were murdered and their corpses mutilated.
This trial about a banal case of violence that resulted in death did not went unremarkable as the incident took place in the disputed Western Sahara and as those who were accused and tried for the killing  are Sahrawis.
As the trial date, set for February 1, was nearing, several International human rights NGOs, lawyers and activists flocked to Rabat to follow the trial proceedings.
Meanwhile, the Algeria-backed Polisario, which is claiming the independence of the Western Sahara, mobilized its lobbyists and the defendants’ families to politicize the trial and try to influence its course and verdict.
The victims’ families and their backers on their part staged sit-ins in front of the court to claim that justice be rendered to their loved ones who were savagely killed.
The trial soon became a topical subject in the information war between Morocco and Algeria, as both countries used their respective media to defend their standpoint regarding the trial.
While the Algerian media, the Polisario and even some Moroccan NGOs, including the Moroccan League for Citizenship and Human Rights (LMCDH) criticized the suing of the convicts before a military court, other Moroccan and foreign experts explained the legality and legitimacy of the move according to the Moroccan law setting up the tribunal and stipulating that the court prerogatives extend to civilians if they commit a crime against a member of the armed forces or analogous.
Besides, it is up to the tribunal itself to accept or reject a complaint and decide whether the case falls within its prerogatives or not. So, there is nothing justifying the critics that a trial before this court will necessarily be unfair, they argued.
On the whole, the comments of human rights NGOs are mitigated, although they have all applauded the court’s decision not to pronounce any death sentence.
The Moroccan Association of Human Rights deplored “the absence of conditions guaranteeing a fair trial.” It mentioned among other flaws the lack of inculpating evidence and the inaccuracy of some dates.
In the meantime, the National Council for Human Rights (CNDH) published a preliminary report describing the trial proceedings as fair. The trial unfolded in a normal atmosphere and the proceedings were on the whole sound, the CNDH report said, adding that the presiding judge saw to it that all the principles and guarantees of a fair trial were respected. The report also noted that interpreters to Spanish, French, English and Hassani, the Sahara dialect, were present all along the trial sessions to translate the court decisions to the defendants and to the foreign observers.
Over 50 international observers have actually attended the trial proceedings that were open to the media and to the public.
Some of these observers have underscored in statements to the media that the trial was as fair as in any state where the rule of the law prevails in conformity with the International Human Rights Declaration.
The trial was respectful of the defendants’ rights, they said insisting that the culprits and their lawyers were allowed all the time they needed to defend themselves, and even when their discourse was outside the scope of the topic, the judge would let them talk.
The trial was necessary not only to render justice to the victims and their families and relatives, but also to underline the supremacy of the law and the role of the state in preserving order and securing peace and security to all citizens.