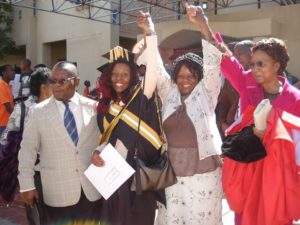 Musawenkosi Saurombe, a Zimbabwe student became the youngest female PhD holder in Africa after she received a PhD in Industrial Psychology at North-West University’s campus in Mahikeng, South Africa on April 25.
“If I had listened to what people will say about my age, gender or race, I would not have taken some of the steps that I took,” Saurombe said when she graduated.
Dr Saurombe who started school at the age of four in Gaborone‚ Botswana indicated that personal and familial sacrifices counted largely for the academic march.
“My father had to sell his car, just to get me through my third year of study and also the general social challenges, usually being the youngest in my class,” She Johannesburg-based online portal the News24.
In her words, what motivates me is my responsibility to be good to others. I am currently working as a post-doctoral researcher and youth activist – ensuring that others can reach their interests and their goals’.
Dr Saurombe who now a higher education ambassador for Bostwana, has skipped several grade levels during her educational journey because of her acumen.
“My parents had to explain to my teachers after wanting to promote me to other grades that I needed time to mature and it was true because when I got to university I struggled,” She was quoted as saying.
Her thesis was titled: “The management perspectives on a talent value proposition for academic staff in a South African Higher Education Institution.”