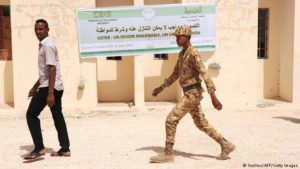 Mauritanians voted in a referendum for abolishing the Senate and changing the national flag of the West African nation, the electoral commission said.

On a turnout of 53.73 percent of the 1.4 million Mauritanians eligible to vote, 85 percent voted ‘yes’ to abolition of the senate and changes to the country’s flag.

The new Mauritanian flag will feature red bands added to the current green flag with yellow Islamic crescent and star, to honor the blood spilt by those who fought for freedom from colonial France.

The Mauritanian President Mohammed Ould Abdel-Aziz “has been in power from 2009. He is serving the second five-year term in office. The opposition is convinced that if these reforms do go through, that will open the door for him to stay until 2024 and possibly much longer,” Al Jazeera’s Rob Matheson, reporting live from the capital Nouakchott, said on Monday.

Several opposition parties and civil society groups have boycotted the controversial constitutional referendum and violent clashes had broken out in recent weeks after the authorities banned several rallies planned by opponents of the changes.

The Mauritanian President had called for the referendum in March after a majority of the 56-seat Senate members rejected his proposal to abolish the upper house. The proposal had been approved by the lower house of parliament.

Abdel-Aziz and his supporters have accused the Senate of corruption and repeatedly said during the referendum campaign that the chamber is costly, useless and does nothing.

Around 20 Senators were expected to hold a meeting Monday to consider the “fraud” committed by Aziz and his supporters.