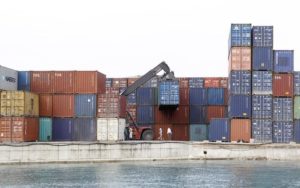 Tanzania’s economic growth slowed to 5.7 percent in the first quarter of this year from 6.8 percent previously, the statistics office of the East African nation said on Thursday.

Tanzania’s annual GDP growth rate averaged 7% over the past 5 years, making it one of the 20 fastest growing economies in the world and beating the Sub-Saharan Africa average GDP growth rate of 4.4% during the same period.

The state-run National Bureau of Statistics (NBS) said the construction sector grew 8.4 percent in January to March 2017, compared with 8.9 percent a year ago, while transport and storage grew 4.1 percent from 7.9 percent previously.

According to the International Monetary Fund (IMF), the economy of Tanzania will grow by 7.1% in 2017, while the World Bank predicts a 7% growth for the same period.

Growth is still supported by substantial government investment in infrastructure, including a standard gauge railway, new roads and expansion of ports.

Tanzania has started building the 300km Standard Gauge Railway (SGR) from the Indian Ocean port of Dar es-Salam to Morogoro, with plans to extend the line to Port Mwanza on Lake Victoria to link Uganda.

Construction of the multi-billion railway line was launched in April by Tanzanian president John Pombe Magufuli.

The Tanzanian government has also dedicated two train locomotives and more than 100 wagons last week to facilitate movement of goods between Kampala and Dar es–Salam.