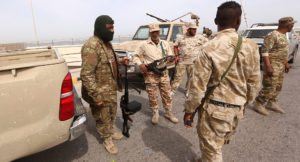 Nine soldiers of Khalifa Haftar’s army, known as the Libyan National Army (LNA), were killed in an attack by an unknown armed group in Jufra district, central Libya, on Wednesday. Two civilians were also killed in the assault.

The soldiers belonging to Battalion 131 were manning checkpoint 400, some 100 km south of Misrata when they were summarily slaughtered and shot in the dead.

It is unknown who carried out the Wednesday assault but all accusations have been directed to the Islamic State group (IS), which is said have regrouped in Jufar district. The terrorist group has reportedly also stolen weapons.

The terror group lost its stronghold of Sirte late last year after forces aligned with the UN-backed nominal Prime Minister Faiez Serra drove the militants out.

Haftar has condemned the onslaught and promised to respond without mercy.

Speaker of the House of Representative, Ageela Saleh, known as Haftar’s political supporter, also condemned the attack calling the LNA to “strike with an iron hand” the terrorists that had carried out the attack, Libya Herald reports.

Serraj also stood on the side of the victims but called for the establishment of a unified Libyan army to tackle terrorism.