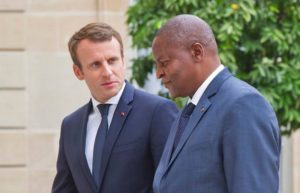 French President Emmanuel Macron on Monday held talks with his Central African Republic counterpart Faustin-Archange Touadera and discussed ways to further intensify bilateral relations and help reconciliation in the war-torn Central African nation.
Faustin-Archange Touadera, who arrived at the Elysée Palace in Paris on Monday, said his brief visit will further strengthen relations between Central African Republic and France.
According to the French President Emmanuel Macron, France will support actions to consolidate peace in the CAR, strengthen justice and fight against corruption.
He also promised to continue the efforts intended to facilitate national reconciliation in the country; adding that the CAR needs a strong State.
Touadera expressed his “gratitude” for the support of France, which was the first country to dispatch an operation to restore order in the war-torn nation.
Paris sent in its troops to the CAR in late 2013 in an effort to prevent violence between Muslim and Christian militias. The mission was later followed by a 3,000 strong UN mission of MINUSCA.
Note that, the country is still heavily reliant on international support. Armed groups still control large areas of the country. CAR’s national armed forces remain under an arms embargo until next January.