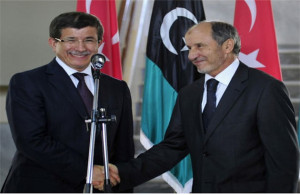 Libya and Turkey are about to settle the dispute about the contracts and deals that were granted to Turkish businessmen before 2011 but that were cancelled after the revolution that ousted the former Khaddafi regime.
As political and economic relations between the two countries are warming up, Turkish businessmen may be compensated for the losses incurred after their contracts were terminated by the Libyan government.
Turkish businessmen have been struggling for over a year to settle their dispute with Libyan authorities, which finally agreed to pay about half of the contracts outstanding payments owed to Turkish firms over the coming weeks. Compensations for breach of contract will also be granted but on the condition that the firms resume work on the abandoned projects immediately.
According to Libyan lawmaker Abdurahman Al-Shater, one of the main reasons behind the compensation move is “price-wise”. The decision was not dictated by political reasons, he said explaining that Turkish firms offer the same quality as their European counterparts at a much cheaper price for the country’s rebuilding projects.
In their desire to increase their activities with Libya, more than half of the companies present at the 2012 Libya-Build exhibition were Turkish companies. Turkey has developed a new foreign strategy to position itself as a principal rebuilder in post Arab spring countries.
The president of the American Chamber of Commerce in Libya1, Richard Griffiths, said the Turkish “are the ones who are reaping the rewards” due to their massive presence in trade related events coupled with their diplomacy. Last year, trade between the two countries was equivalent to around $2.5 billion.
More than 3,000 Turkish nationals left Libya when the uprising began. The debt owed to about 100 Turkish firms is estimated at $20 million. The Ankara government exerted pressures on Libya to get its businessmen, operating mostly in the construction sector, to be paid ahead of those from other countries.