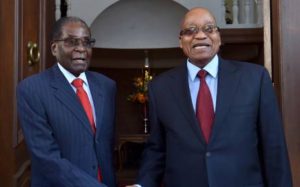 Zimbabwe’s President Robert Mugabe on Wednesday tanked the South African government for giving Zimbabwean nationals employment opportunities.
Mugabe who was in official visit in South Africa, said many of Zimbabwe nationals in the country have found incomes through employment.
Mugabe acknowledged that some Zimbabweans were in South Africa illegally, and others did bad things.
President Jacob Zuma has called for the urgent establishment of a one-stop border post between South Africa and Zimbabwe to avoid unnecessary delays.
Note that Zimbabwe has an unemployment rate of more than 85%, according to the country’s umbrella labour body, the Zimbabwe Congress of Trade Unions. Zimbabwe Statistics Agency puts the figure at 11%.
Under long-time President Robert Mugabe, Zimbabwe has suffered mass unemployment, a collapse of many public services.
Zimbabwe’s economy will grow by 3.7% in 2017, according to the finance minister, despite a public sector wage bill devouring much of the government’s expenditure.
According to the government, the growth would be boosted by the farming sector, which is forecast to grow by 21.3% this year, along with mining which will grow by 5.1%.