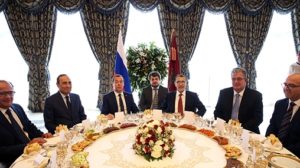 Morocco expressed its steady commitment in favor of Africa and invited Russia to seal a tripartite partnership to undertake mutually beneficial projects in the continent.

The call was made by Head of the Moroccan government who was speaking at a Moroccan-Russian working session on the occasion of the state visit of Russia’s Prime Minister Dmitri Medvedev to Morocco.

EL Othmani underscored that Morocco has a strong presence and expertise on the African continent and is willing to engage in a partnership with Russia benefiting the three parties.

Morocco is also interested in reinforcing its partnership with the Eurasian Economic Union which opens to Moroccan exporters a market of over 200 million consumers, said El Othmani.

The Moroccan government chief also commended Russia for its firm position in support of a consensual and political solution to the Sahara issue.

The visit by Medvedev to Morocco was marked by the signing of 11 agreements that build on the momentum ushered by the visit of King Mohammed VI to Russia in 2016 during which 16 agreements were signed.

The 11 agreements are conducive for bolstering cooperation in the fields of customs, agriculture, trade, energy efficiency, renewable energies, nuclear energy as well as military cooperation.