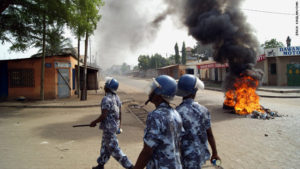 The United States has issued a security alert on Tuesday, calling on its citizens in Togo to be safety conscious of their surroundings at every point as fresh anti-Gnassingbé protests kicked-off again in the West African nation.

Togolese opposition parties have begun a fresh wave of protests against the regime of President Faure Gnassingbé, starting Wednesday October 18 to Thursday the 19th.

The US Embassy in Lomé said the rallies are ‘unauthorized’ in line with the government ban.

According to the Embassy, protesters are expected to use a number of routes in areas of central, northern, and northeastern Lomé.

Major traffic disruptions are likely in Lomé and public bus and private taxi services may be interrupted.

The protesters are demanding a return to the 1992 Constitution, which puts term limits on the presidency.

At least four people were killed and dozens were injured since august as a result of a crackdown in the opposition strongholds in the north of the country, a region previously seen as reliably pro-government.

Faure Gnassingbé, in power since the death of his father in 2005, was re-elected in 2010 and again in 2015, in votes that the opposition denounced as unfair.