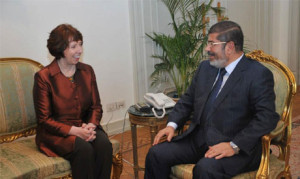 While Egypt is in dire need of foreign assistance to take up the various challenges triggered by the severe downturn of its economy, Members of the European Parliament have made it clear that they are opposed to financial support to Cairo unless the government makes progress in matters of democracy and that the EU aid package promised for 2012-2013 is partly conditional on this progress.
“The EU should withhold budget support from Egypt unless it makes significant progress with human rights, democracy and the rule of law,” said the MEPs in a resolution adopted on Thursday, according to a press release by the European Parliament.
The EU should set clear conditions for its aid to Egypt, following the “more for more” principle, should it steer away from democratic reforms and respect for human rights and freedoms, the EP says.
Civil society, women’s and minority rights must be the primary focus of EU aid, the resolution stresses, recalling that the EU aid package of nearly EUR 5 billion for 2012-2013 is partly conditional on respect on human rights, democracy and economic governance.
MEPs are deeply concerned about the increasing polarisation and continued violence in Egypt, and are especially alarmed by the rise in violence against women, in particular female protesters and women’s rights activists, the resolution points out stressing the need to bring to justice the perpetrators of such violence.
All laws allowing for the unrestricted use of violence by police and security forces against civilians must also be abolished, MEPs say.
MEPs “acknowledge” the decision by the Egyptian electoral commission to cancel the parliamentary elections scheduled for April. “The government should now use this period to set up an inclusive political process based on consensus,” they underline, alluding to the opposition forces’ announcement that they would boycott the elections amidst concerns over the lack of guarantees of a free and fair ballot.
The resolution also urged EU Member States to facilitate the return to the people of Egypt of assets stolen by the former regime, underscoring that these assets could contribute to delivering justice and accountability to the Egyptian people.
Meanwhile the $4.8 billion loan Egypt was expecting to get from the IMF to reactivate its battered economy has not been finalized, as negotiations were hampered by political turmoil and frequent violent clashes between demonstrators and law enforcement agents.
Awaiting the end of the negotiations, the IMF offered to grant Egypt a $750 million emergency credit, but Cairo announced earlier this week it refused to resort to emergency measures and that it had started implementing a full economic reform program, as requested by the multinational financial institution, entitling it to the promised $4.8 billion loan.
An IMF delegation is reportedly expected in Cairo later this month to carry on negotiations on the loan.
The IFC Chief Executive Officer and Executive Vice President, Jin-Yong Cai, who is visiting Egypt this week, expressed optimism at the country’s economic potential in the long run.
“Egypt has long-term economic potential,” he said, adding that the key to unlocking this potential lies in supporting the country’s private sector.
According to an IFC release, Cai’s visit is part of IFC efforts to support Egypt during its transition.
Over the past two years, IFC has committed $723 million to 11 projects, including mobilization of $191 million. It has also been providing advisory services to strengthen business regulations, increase access to finance, support the development of smaller enterprises, and assist in the creation of public-private partnerships in infrastructure.