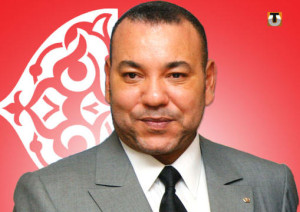 The King of Morocco is starting as of Friday March 15 an official visit to Senegal, first leg of an African tour that will also take him to Gabon and Cote d’Ivoire.
The visit to Senegal is not a surprise to anyone, as king Mohammed VI has always included the Dakar phase in his trips to Africa.
Thus, in 2001, just two years after coming to power at the demise of his father, the King paid a state visit to Senegal. In June 2004, the Moroccan king paid a second visit to Senegal part of an African tour that also led him to Benin, Cameroun, Gabon, and Niger. Less than a year later, in the spring of 2005, during a tour that and also included Burkina Faso, Gabon, and Mauritania, King Mohammed VI was again received in Senegal as an official guest.
In November 2006, the king will pay a work visit to Dakar, his fourth to Senegal in just five years.
Each of these visits provided opportunity to consolidate further the historical longstanding relations binding Morocco and Senegal, to sign more cooperation agreements, and to give a new momentum to investments, both at the level of state-owned companies and at the level of the private sector.
Economic relations between the two countries are described as very good and according to 2011 figures, Senegal was Morocco’s leading trade partner in West Africa with a volume estimated at $122 million.
This bilateral cooperation is not limited to the trade and economic sectors only but also covers education and training. Hundreds of Senegalese students are attending Moroccan Universities and other higher institutes with grants from the Moroccan Government. Many Senegalese civil servants and even military also benefit from training and refreshing courses in Morocco.
The two countries are also bound by strong historical and religious ties
and the followers of the Tijani confraternity regularly come to Morocco to visit the Mausoleum of Sheikh Sidi Ahmed Tijani, the founder of this soufi confraternity, who is buried in Fes.
Besides these very strong economic, cultural and spiritual ties, Morocco and Senegal have established a political partnership that defies time and men. Whether Senegal is ruled by a Leopold Sedar Senghor, a Abdou Diouf, a Abdoulaye Wade or a Macky Sall, the country has always been keen on preserving its firm political ties with the North African kingdom, and Morocco, under the reign of the late Mohammed V, the late Hassan II or under the reign of King Mohammed VI has always endeavoured to upgrade its privileged partnership with the West African country.
This fifth royal trip to Senegal is providing a new opportunity to the two heads of state to reiterate their mutual commitment to the everlasting, outstanding relations binding the two countries.