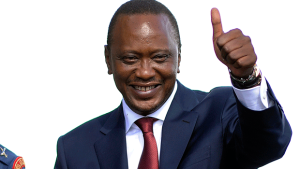 The Kenyan electoral commission on Monday declared President Uhuru Kenyatta winner of the rerun presidential election by 98.26% of votes.

The opposition candidate Raïla Odinga despite his boycott garnered 0.96% of the vote.

The poll was not held in 25 constituencies across four counties. However, the IEBC had said the boycott in the four counties did not have an impact on the poll.

In a tweet posted later on Monday, President Yoweri Museveni in his capacity as chair of the East Africa Community (EAC) congratulated the president-elect Uhuru Kenyatta on his successful re-election to serve a second and final term.

Uhuru Kenyatta, 55, is the youngest President in the country’s history when he was sworn in in 2013.

Before his election for his first term, Kenyatta was a deputy prime minister in the Mwai Kibaki government. He is also the son of the country’s first president Jomo Kenyatta.