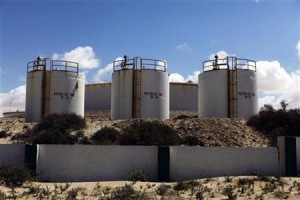 With oil companies already complaining about their production being affected by the frequent strikes of their employees, another shooting has taken place at different fields after a similar incident occurred recently at the Mellitah gas complex which affected exports for almost a week.
A militia group, many of whom are believed to be from the eastern town of Ajdabiyah, opened fire at men working for the oil protection force securing the Dahra field. Clashes are reported to be going on and plans are being made to assure the safe passage of the workers on the field which belongs to Waha oil.
A demonstatrtion at Gialo 59 is on its 8th day and there have been no signs of relenting as they demand the field owned by Waha oil to use locally hired vehicles and drivers. Although the entrance has been blocked with cars, Deputy Oil Minister Omar Shakmak has claimed that production is not affected. However, a source said that 5 drilling sites are already affected and more could follow.
Another fire exchange is also reported to be heard coming from the nearby al-Ghani field, which belongs to another Libyan oil company, Zueitina. Officials of the company were not available for comments.
Libya is struggling to secure its vital energy industry and has established the Petroleum Facilities Guard, a special force team of 15,000, to provide security to energy installations. Security however, stills remains to be an unsolved as recent events have attested. Protests and demonstrations are also becoming damaging for investors.
Oil Minister Abdulbari al-Arusi said “these (strikes) impact the lives of citizens and Libya’s relationship with foreign companies” and they will “use force if these strikes continue to impact important facilities.” Libya wants to increase its production.