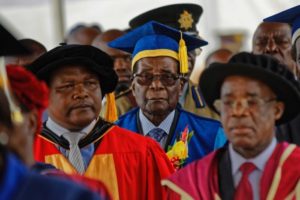 Zimbabwean ex-Vice President Emmerson Mnangagwa on Tuesday called on 93-year-old President Mugabe to resign, saying he needed to heed the “clarion call” of his people.

The self-exiled Robert Mugabe’s most likely successor, Emmerson Mnangagwa, said he had been in contact with Mugabe and invited to return but would not do so until his personal security could be guaranteed.

Zimbabwe has been in political turmoil since last week after armed forces seized power and placed Mugabe under house arrest.

The veteran leader so far appears resistant to demands to step down despite calls from the ruling Zanu-PF party to do so. He has been deserted by most of his allies, while others have been arrested. There was a massive anti-Mugabe protest over the weekend demanding that the president steps down.

The president had earlier been revoked by the party as its president and secretary. But in an address to the nation last Sunday, he said he still remained in charge.

The Zanu-PF party is expected to begin impeachment proceedings in parliament on Tuesday in an attempt to strip Mugabe of the presidency.

The president, who is believed to be staying at his private home in Harare, a well-guarded compound known as the Blue Roof, is reported to have asked for more time in office.